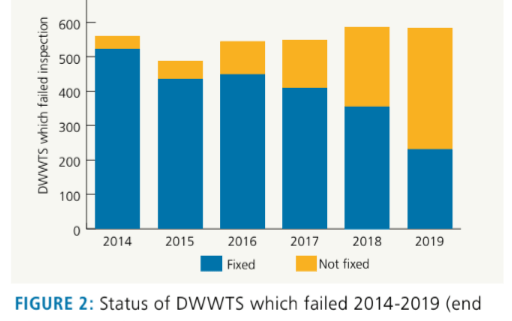 The EPA’s annual report shows that half of all septic tanks in Ireland (1,160) failed inspection last year.

The Environmental Protection Agency (EPA) National Inspection Plan for 2019 found that 26% of systems were a risk to human health or our environment with a further 51% of systems failing altogether.

In addition, 73% of failed systems between 2013 – 2016 were fixed but the EPA has warned that greater engagement is needed by Local Authorities in Ireland.

Local Authorities identified more serious issues with nearly 300 systems where they were found to be a risk to human health or the environment, the EPA said, with 27% of systems inspected since 2013 still not fixed.

“While there has been progress, the failure to resolve older cases remains a concern and must be addressed as priority, the EPA said in a statement today.

Domestic waste water treatment systems are used by rural householders to treat sewage with nearly half a million systems in Ireland. Most of these (90%) are septic tanks.

Today’s findings show that half of all septic tanks (1,160) failed inspection last year. A lack of maintenance and desludging was identified as a key issue at domestic systems, according to the EPA.

Commenting on today’s report, Dr Tom Ryan, Director of the EPA’s Office of Environmental Enforcement said: “If you do not maintain your septic tank, it can contaminate your own or your neighbour’s well, putting your health at risk and that of your family and neighbours.

“It may also pollute your local stream or river,” said Ryan. “You can take simple steps to maintain your septic tank by cleaning it out regularly and by making sure it is not leaking, ponding or discharging to ditches.”

The above article was written by Cónal Thomas and posted on The Journal.ie 22/07/20

Environmental Protection all under control at Dublin Airport by O’Reilly...
Scroll to top