We are delighted to have worked with our client, a wedding venue in Co Meath, where we installed a Super BAF system.

Our client needed a wastewater treatment system that is going to stand the test of time. As an award winning wedding venue they don’t want to be replacing their tank in a few years & with our maintenance contracts we can ensure the system is running smoothly and checked regularly by our team of technicians. 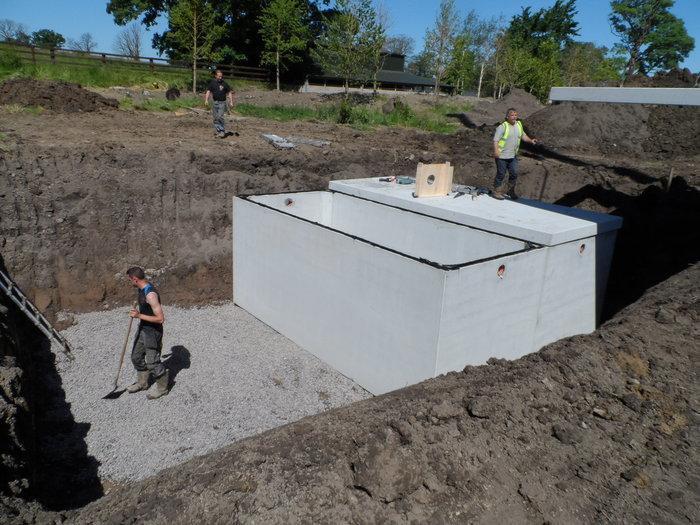 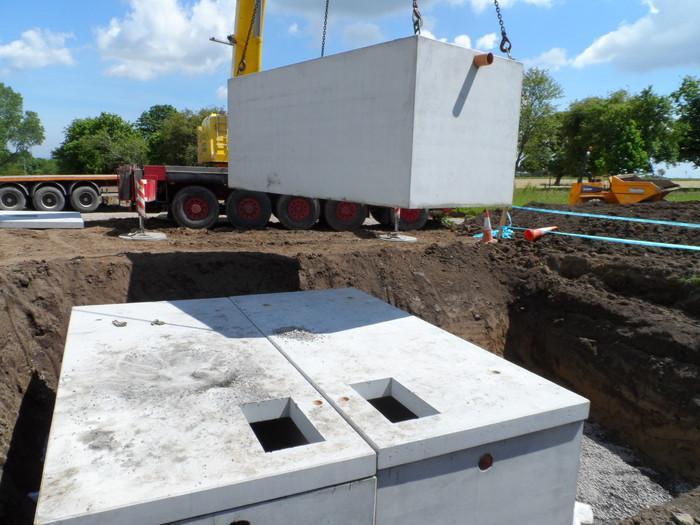 O’Reilly Oakstown Environmental installed a wastewater treatment system for the castle during the course of the build.The transformation of the 800 year old building was a credit to all involved in it’s restoration. 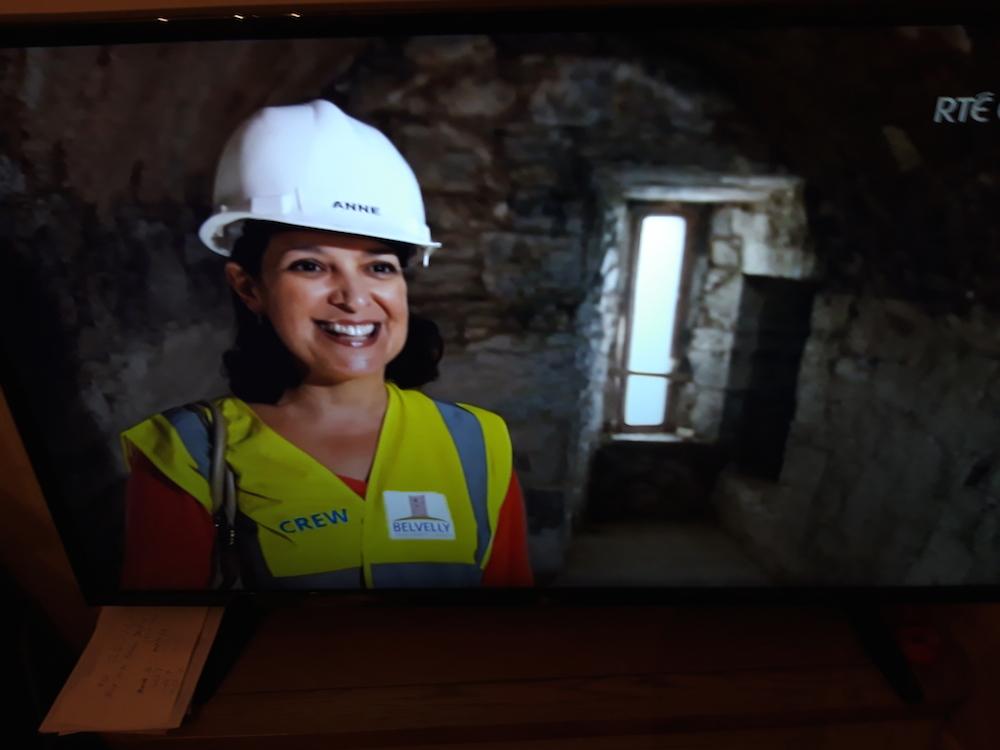 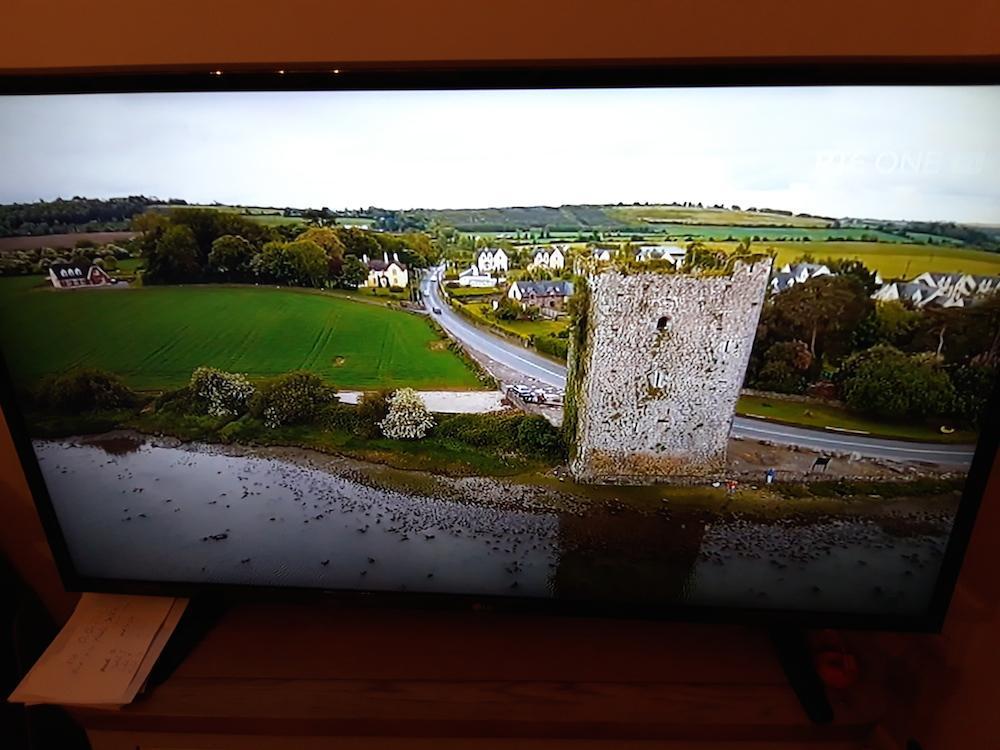 The fine weather offers an ideal opportunity to carry out works with faulty septic tanks and sewage treatment systems. Every homeowner with a private sewage treatment system is obliged to make sure their system is installed, operated and maintained in a way that makes sure it does not pose a risk to human health and the environment. According to the Environmental Protection Agency (EPA), around 500,000 households in Ireland have a wastewater system that includes septic tanks and packaged systems.

Sewage treatment in one-off houses in rural Ireland traditionally consisted of a septic tank and gravel percolation area. The septic tank is the primary treatment area where primary separation of solid waste (sludge) within the water occurs.

Secondary treatment of wastewater is used to further purify wastewater. This is usually carried out using gravel percolation beds where the soil is expected to do the remaining 70% of sewage treatment. However, more modern systems have special secondary treatment systems that aerate the wastewater and mix it with a solution of microorganisms. Territory wastewater treatment involves removing phosphates and nitrates from the water supply. In Ireland, filtration systems are used to achieve this using peat beds, shredded coconut husks or sand filtration.

Existing tanks need to be maintained and checked often for blockages, ponding, odours, noises and sewage in nearby ditches and streams. Routine maintenance also needs to be carried out. 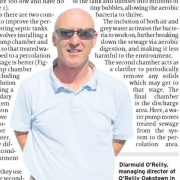 Diarmuid O’Reilly, managing director of O’Reilly Oakstown, a wastewater treatment company based in Trim, Co Meath, says many of the sewage treatment systems in rural areas are not performing as they should.

“Some systems are leaking, while the design of others is not appropriate for the area it is situated,” Diarmuid explains. There is a grant available to upgrade existing tanks but this is inaccessible for the majority of homeowners.

Householders who registered their system by the prescribed date of 1 February 2013 may be eligible for this grant aid to repair or upgrade their system. However, to avail of the grant, you first have to fail a council inspection.

The number of inspections carried out have been very low to date per county. If you upgrade your system without a grant you should be familiar with the requirements of the legislation and your obligations as an owner.

Planning permission may be required if you are upgrading an existing sewage treatment system or installing a new one. The EPA advises to firstly check with your planning authority on whether planning permission was granted for your existing system including the type and location of system.

Where remediation is required, the EPA recommends that the homeowner procures the services of a competent wastewater professional.

Sometimes, it may be possible to fix a tank by fixing the T-bend where the waste enters the primary tank.

A properly functioning T-bend slows down the rate of movement of solids into the tank, reducing the splash effect in the tank so that a scum layer can form creating anaerobic conditions for waste water treatment. Many existing systems are not working efficiently because percolation areas are too low and have no soakage (Figure 1). 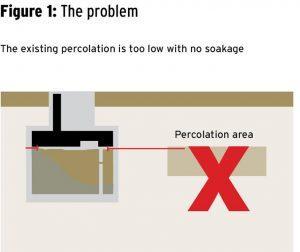 Diarmuid says there are two common solutions to improve the performance of existing septic tanks. One solution involves installing a new 750-litre pump chamber and distribution box so that treated water can be pumped to a percolation area where soakage is better (Figure 2) 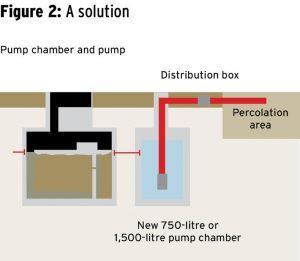 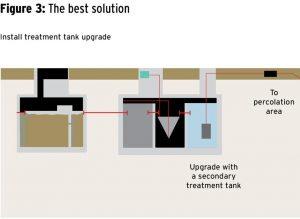 This pump chamber costs €1,150 including VAT. The other solution involves installing a bespoke secondary treatment system with an aeration system to improve the treatment process and further purify wastewater. There are many different types of secondary sewage treatment systems.

In Oakstown, they use a three-chamber secondary treatment process to digest, clarify and then pump the water from the two primary chambers. In the bioreactors, aerobic bacteria are cultured on durable netted plastic biomedia. This gives the microbes adequate surface to attach to while air is blown through the tubes from a low-watt blower sitting on top of the tank.

The air enters the tubes from the bottom of the tank and diffuses into millions of tiny bubbles, allowing the aerobic bacteria to thrive.

The inclusion of both air and grey water activates the bacteria to work on, further breaking down the sewage via aerobic digestion, and making it less harmful to the environment.

The second chamber acts as a clarifier to periodically remove any solids which may get to that stage. The final chamber is the discharge area. Here, a water pump moves treated sewage from the system to the percolation area. Diarmuid says up to 99% of the sewage treatment efficiency can be achieved after it goes through the combination of primary and secondary treatment. This secondary treatment tank costs €3,050 including VAT.

If installing a new system for a new dwelling house or an existing home, Diarmuid says a soil engineer should be consulted before any decision or system choice is made. A soil engineer will assess the site and recommend what type of treatment system is necessary.

A site assessment will determine whether a particular site can achieve the safe dispersal of wastewater from a development. Diarmuid says soil engineers carry out T-tests and P-tests. Very good soils that are efficient at treating grey water in a percolation area will typically have a T-test result of five to 20.

Extremely free-draining soils with a T-test result under five are likely to require a secondary treatment system because partially treated sewage may make its way directly into groundwater or wells too easily.

On the other hand, wetter soils with a T-test over 20 would also be more likely to require secondary sewage treatment because in time there may be a risk of clogging in average to poor soils. As a rule of thumb, to calculate the size of the septic tank required, multiply the number of people in the house by 150 litres (as a person uses 150 litres/day) and add 2,000 litres. For example, a six-person house is (6 x 150) + 2,000 = 2,900 litres. Diarmuid says they have a combined primary and secondary treatment system designed to cater for a six-person household which costs €3,600 including VAT.

Routine maintenance of tanks mainly involves desludging. All of the wastewaters from your home go into your system. The sludge is a buildup of all solids. The sludge must not build up too much or your system will stop working properly.

According to the EPA, if the sludge is not removed, it can block the pipes in your percolation area. If this happens it is very difficult to clean and may require replacement.

It could also cause a risk to human health and the environment.

The sludge should be removed from the tank when it takes up more than half of the liquid depth in the tank or at least every five years.

A minimum of 75mm of sludge should remain in the tank as it contains billions of the good microbes necessary to help breakdown the new solids. Use a permitted waste contractor and keep your receipt.

How to ensure your sewage treatment system continues to work correctly:

Desludge your septic tank every four to five years, a crust forming in the second chamber is a tell-tale sign it needs desludging. If drains leading from your house are backing up, it points to a possible full tank and perhaps issues with the percolation area.

Check that the air vent from the sewer pipe is unobstructed and is sufficiently high above the house to disperse odours away from the house.

Keep inspection lids on at all times and only open when necessary.

Ensure that the electrics are well above any potential flooding in the garden.

Fit alarms to alert you if any electronic component of a sewage treatment system is not functioning correctly.

Don’t flush wipes, cooking oil, panty liners, hair, sanitary towels, etc, down the toilet because they can cause blockages.

Don’t overuse disinfectants and bleaches down the toilet because they can kill the bacteria in the sewage treatment system that are essential for the breakdown of effluent.

Don’t allow waste food from food macerators into the system as the biological oxygen demand (BOD) resulting from this far exceeds that of normal waste.

How do you know if you should be considering septic tank desludging?

Obviously if the tank is full and backing up to the house this is not just a matter of a quick-fix desludging but a percolation problem which requires considerable more work.

At the end of the day it is the homeowners responsibility to ensure that the septic tank and percolation area perform properly and that they do not pollute the wider environment.

Read our post on Maintenance of a Septic Tank here.

Read the EPA Report and Guidelines for owners of septic tanks and packaged treatment systems to help to address the lack of understanding among homeowners of how their domestic wastewater treatment systems operate and to encourage responsible operation and maintenance.

If you have any questions about septic tank desludging, follow the link below

The most important element in the effective maintenance of a septic tank is desludging of the primary chamber periodically.

Contrary to what some people believe, ALL humans produce sludge.

How much? Roughly 90 litres per year. This the equivalent of a grown man. Given time this will compact to 60 litres.

Once this more than half fills the primary chamber, it then starts to overspill into the second chamber and into the percolation area.

Moreover, it reduces the available capacity for anaerobic digestion , thereby increasing the amount of untreated sewage to the percolation area.